Legendary photographer, Peter Lindbergh, who was instrumental in creating the phenomena known as the “supermodel” died on 3 September aged 74.  Known for his trademark moody black and white portraits, Lindbergh’s work appeared in magazines such as Harper’s Bazaar, The New Yorker, Vanity Fair and Vogue.  Lindbergh was a pioneer of a new form of realism that redefined accepted standards of beauty in the fashion industry.   He appreciated naturalism and eschewed make up, putting together models of different ethnic backgrounds celebrating their individual and collective beauty.  Surnames became redundant for Linda, Naomi, Cindy and Christy, Claudia and Helena.

Born in 1944 in Lissa, Germany, he left school at 14 and worked as a window dresser where he developed a talent for arranging backgrounds for shoots.  Following in the footsteps of his favourite painter, Vincent Van Gogh, he went to Arles in 1968, followed by the College of Art in Krefeld, Germany.  In 1971, Lindbergh moved to Dusseldorf where he focused on his photography.  He discovered early photojournalism and was inspired by the work of Dorothea Lange, Diane Arbus and Henri Cartier-Bresson.  He moved to Paris in 1978 and the leap to fashion photography came when he was asked to photograph the Paris and Milan fashion shows for Stern magazine.

He worked with many designers and international magazines throughout his career and has photographed everyone from Madonna to Greta Thunberg.  In a twist of fate that almost seems pre-destined, one of Lindbergh's last commissions was the cover shoot for the HRH the Duchess of Sussex guest edited September 2019 issue of British Vogue, the same publication that put his black and white image of 5 models in streetwear on the cover in January 1990 and changed the fashion world.  In an interview in 1996, Karl Lagerfeld said of Lindbergh’s work: “his vision of women is always up-to-date, but at the same time timeless.” He is survived by four sons and his second wife, Petra Sedlaczek. 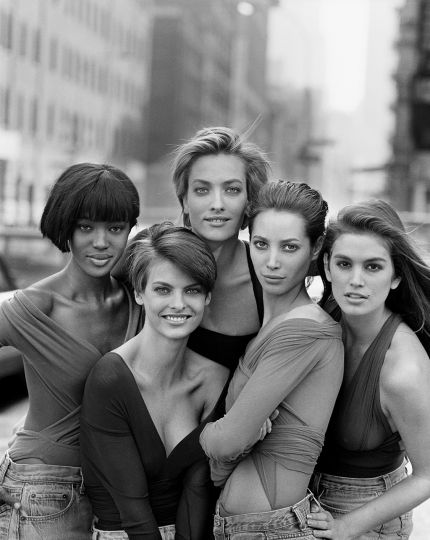