The Costume Institute within the Metropolitan Museum of Art in New York City, houses nearly 35,000 costumes and accessories spanning seven centuries and five continents.   It is the only curatorial department within the Museum that is self-funded.  How does it raise income? In one night it raises the department’s total annual operating budget through the glamorous event we all know as the Met Gala. The event being the opening night for the Museum’s annual exhibition which celebrates a different theme each year. This year the MET honours Rei Kawakubo of Comme des Garcons well known for her avant-garde designs and ability to challenge conventional notions of beauty, good taste, and fashionability.

Rei Kawakubo is a Japanese fashion designer based in Tokyo and Paris is known for her anti-fashion, austere garments.  For over 30 years she has challenged the Western perception of beauty and fashion and is the world’s foremost innovator in avant garde design which extends far beyond the business she has founded. Described as media shy, withdrawn and reserved many believe her real personality lays within her designs that reflect that she is brave, fears nothing and always challenging.  It seems ironic that this year’s MET exhibition honours a woman who detests classification but is also is quite fitting to exhibit the creations of a fashion designer of dichotomy. Never formally trained she studied fine arts at Keio University and upon graduation she worked in a textile store and then became a freelance stylist.  In 1973 she created her own designs under her own label Commes Des Garcons.  She chose the name from a misquote of a Francois Hardy song even though many believed it had the more sophisticated French meaning which is ‘boy like’  because she created androgynous shapes.  She opened her first shop in Tokyo in 1975 which was mainly women’s clothes then added a men’s line in 1978. 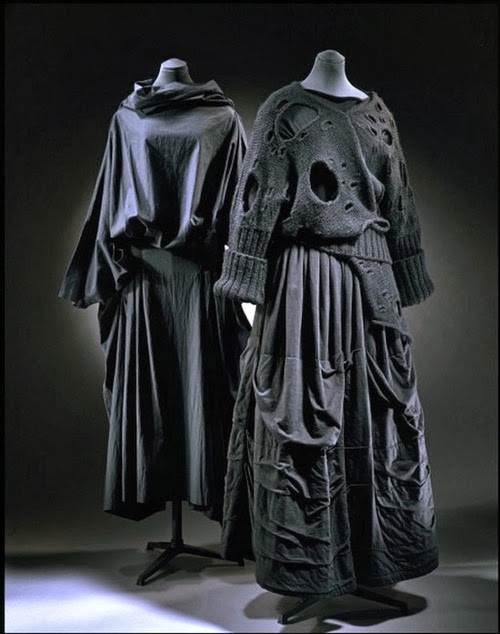 Image: Painting of the Bohemian

In the 80’s a period of time known for great materialism, fashion saw bright neon’s and figure clinging garments. Rei Kawakubo presented her collection ‘Destroy’ in 1982 in Paris with pieces that presented quite the opposite notion.  Black, oversized, shapeless tattered black vestments on dishevelled models dominated her runway show which seemed like a clear message of defying the brassy materialistic glitz of 80’s fashion, challenging the beholder with questions of identity and beauty.  Causing a fashion uproar, journalists referred to her collection as 'Hiroshima Chic'.

Her 1987 runway show was called ‘Dress meets Body, Body meets Dress’. This collection presented like a deformity of the figure with gingham bulbous pieces made from goose down feathers based on the concept of a woman being physically attached to her burdens.  The use of gingham seemed to be a nod to the stereotype housewives of the 1950’s when gingham material was very popular.  This collection was and remains to this day; ground breaking because it represented fashion as an art form. 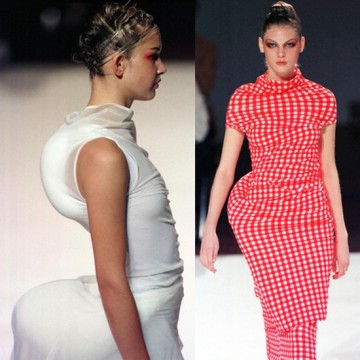 Image: Emod
Rei Kawakubo doesn’t see herself as an artist yet she is forced to enter in the debate of art and fashion with her designs.  There is no other designer in the world that is greatly admired by both the fashion audience and art world.   Rei Kawakubo, Comme des Garcons: The Art of Inbetween, the exhibition of her designs will stand in the MET from May 4 – September 4 2017.