Fashion can reflect the social and political climate of any given period.  This was certainly true when politics made a furore in 2016/2017 inspiring collections for many designers who used their runway shows to highlight recent issues which included women’s rights, immigration and equality.

The Council of Fashion Designers of America (CFDA) lead the charge by creating pink buttons that stated "Fashion stands with Planned Parenthood" which were distributed to many people before New York Fashion week. The Planned Parenthood Federation of America (PPFA) is a nonprofit organization that provides reproductive health care in the United States and globally.  The CDFA were hoping to raise awareness of President Trump’s executive order which will defund this organisation.  These buttons were seen on the street style set, front rows, on the runways and also on the lapels of fashion designers. 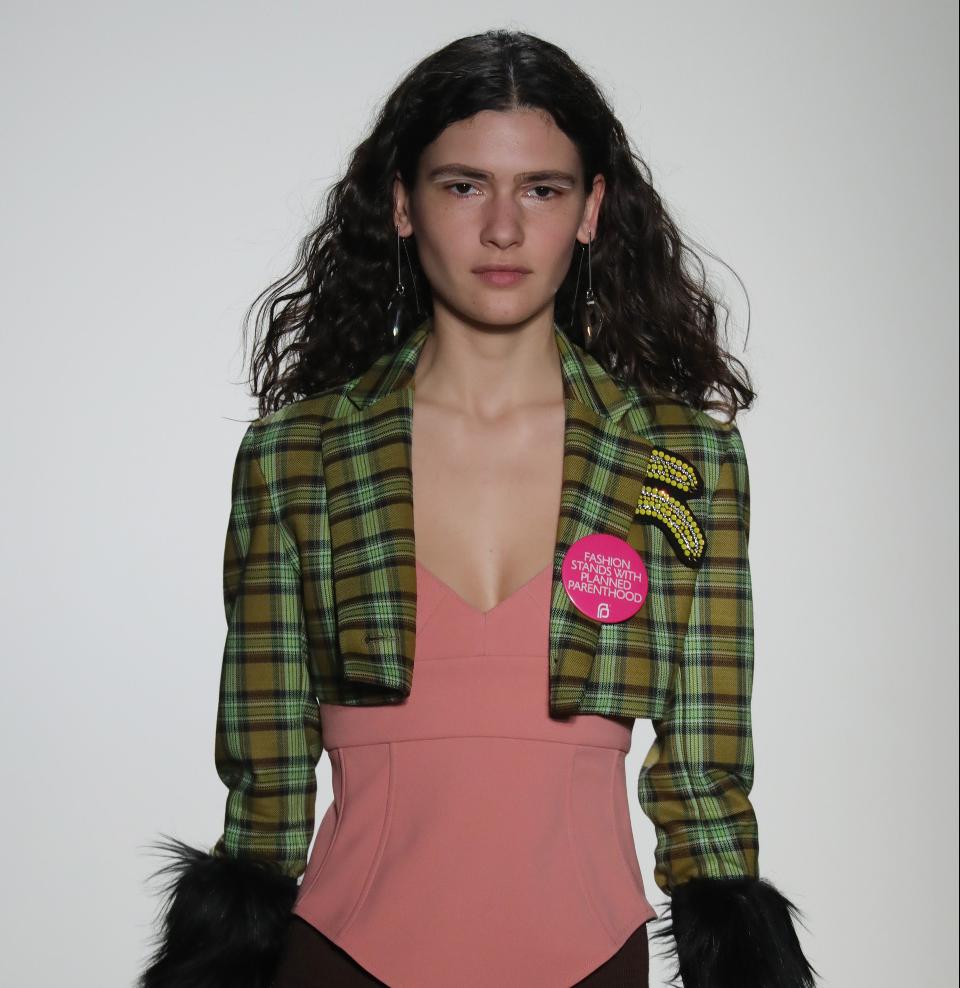 Ryan Lobo and Australian fellow designer Ramon Martin of label TOME were inspired to create their autumn collection with some feminist political fun. These two male designers attended the historical women’s march in Washington and given the fact they impact women’s lives on how they dress them, they saw it as a responsibility to not  stay silent on the current women’s rights issues. The pair paid homage to Guerrilla Girls an anonymous all female art coalition fighting for women’s rights. Their collection included guerrilla fur, punk tartan and alpaca sweaters hand knitted by a Peruvian women’s collection. They also sent one of their models down the runway with one of the CDFA buttons for planned parenthood and in the finale the duo came out with planned parenthood t-shirts. 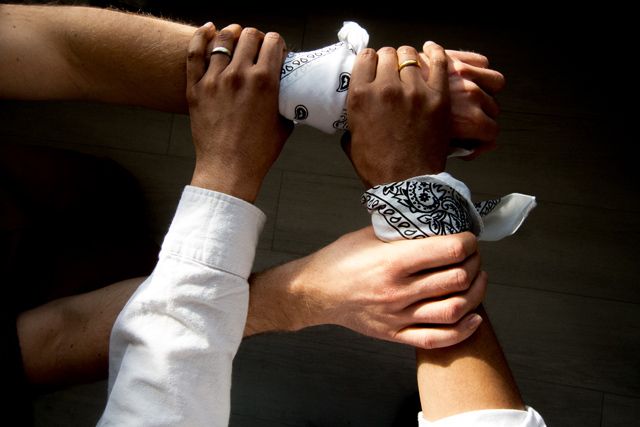 UK based publication Business of Fashion used Tommy Hilfiger’s Los Angeles show as a launch for their campaign #tiedtogether establishing a white bandana as a sign that you believe in the common bonds of humankind including race, sexuality, gender or religion.

Indonesian designer Anniesa Hasibuan made history last year by becoming the first designer to have a NYFW collection with hijab. For this collection she cast her show using all immigrants and second-generation children of immigrants.

Over in London, Teatum Jones opened London Fashion week with models Kelly Knox born without the lower part of her left arm and Jack Eyers an amputee who both walked to a soundtrack with Meryl Street lambasting Donald Trump for his mockery of a disabled reporter.

Public School Creative Directors Dao-Yi Chow and Maxwell Osborne used their platform as a parody to politics.  Models walked to a remixed version of Woody Guthrie’s 'This Land is our Land' and wore hats with the message: "Make America New York Again." 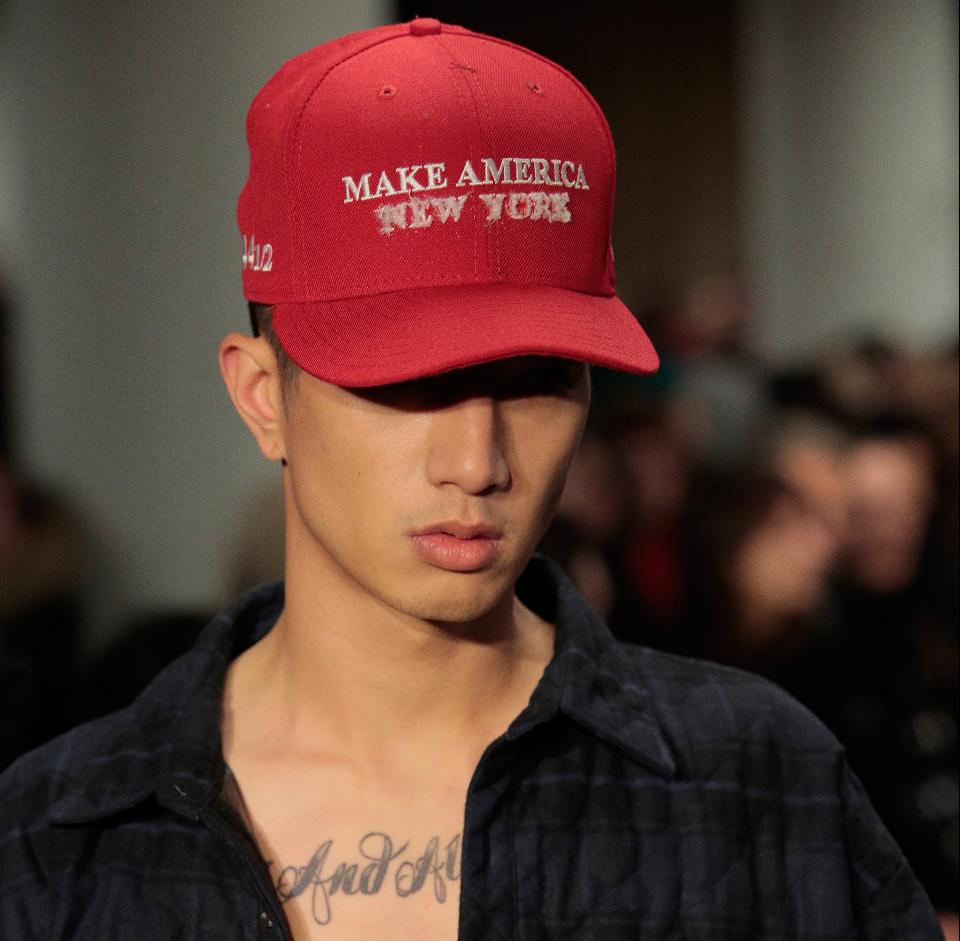 One of the standout shows was for Nepalese born designer Prabal Gurung.  After a beautiful presentation of lush fur coats and fluid flowing evening dresses Bella Hadid lead a political procession with a shirt that read "The Future is Female".   Models followed her with messages on their shirts such as "Break down Walls" and ‘’I am an Immigrant".  Some of the slogans paid respect to Martin Luther King Jr whilst others were a shout out to Senator Elizabeth Warren. The designer finished his show with a statement: “This is my love letter to you. Our woman who inspire us to present our unabashed and unapologetic definition of femininity with a bite.” 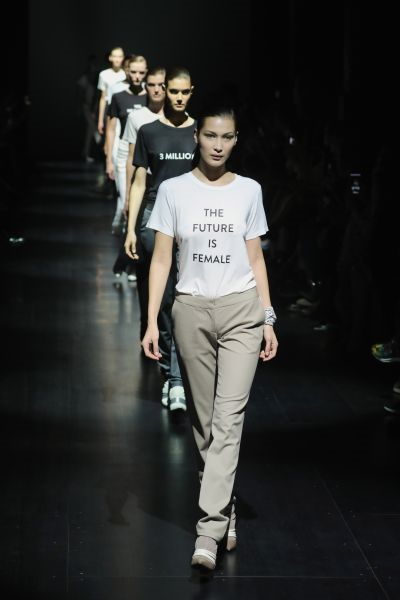 Designer Ashish Gupta sent models parading down the runway in a line-up of glittery, rainbow pieces, many of which were splashed with bold messages including “More Glitter Less Twitter,” “Nasty Woman,” “Why Be Blue When You Can Be Gay?” and “Love Sees No Color.” The message about twitter is surely in reference to President Donald Trump’s affinity for using the social media platform. 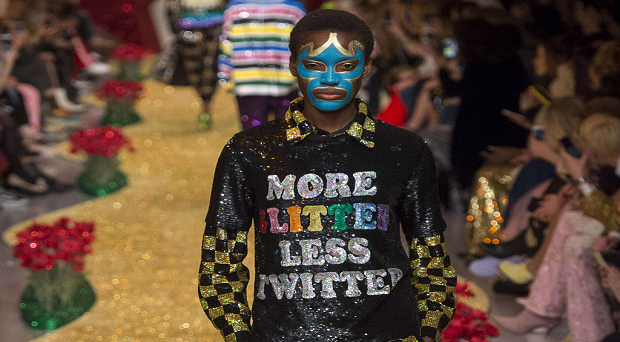 The last model for Prabal Gurung collectively echoed the strong social and political sentiment coming from the runway this season.  Her white shirt simply bearing the words "We will not be silenced".