London Fashion Week was a celebration of British culture in every aspect. From Royal Airforce officers to flower children, each designer has drawn inspiration from particular trends, periods and aesthetics that are apart of Britain's past ultimately resulting in a phenomenal display of diversity.

There was no better way to showcase the unpredictable excitement of British fashion than beginning the week with London’s own, Matty Bovan. Having embraced the eclectic style of his grandmas closet, the debut solo designer held nothing back, unleashing an onslaught of piled yarn webs, voluminous fabrics and eccentric ballon headpieces. The collection was an almost ironic re-presentation of the British aristocracy, as destroyed woollen jackets and frayed hems reclaimed past symbols of elitism for an egalitarian demographic. 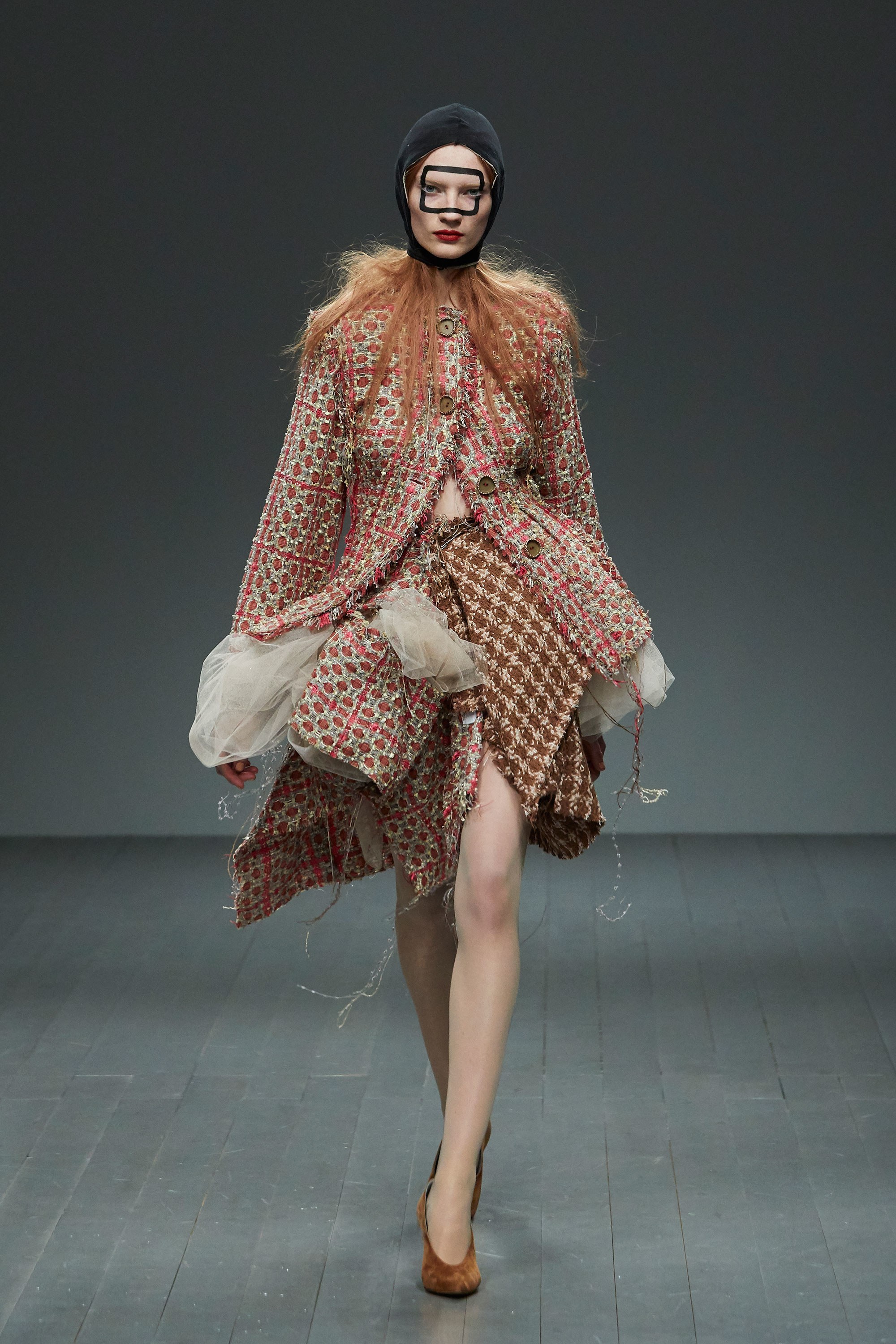 From one bright beginning marks another sad end, as Christopher Bailey celebrated his final show at Burberry with an energetic, nightclub light show in collaboration with London based art group ‘United Visual Artists’. However impressive the vivid streams of fluorescent colours might have been, they had nothing on the rainbow invasion that branded Bailey’s fall collection.

Contrary to Burberry’s long past, Bailey has recently reinvigorated the London-based fashion house as an exciting and approachable brand. Cosy cotton sweatshirts and collared windbreakers synonymous with Britain’s street culture were stamped and layered of the brand’s infamous beige plaid, eliminating connotations of elitism and swankiness that have previously tainted the iconic print.

What is most commendable about Bailey’s final collection is the overt wearability of his clothes. Each garment is not dependant on another in order to look aesthetic. He has allowed customers to pick and choose items from other designers whilst also wearing items from his collection. Such a strategy has opened up Burberry to a much larger demographic and has eliminated the exclusivity of luxury brands. 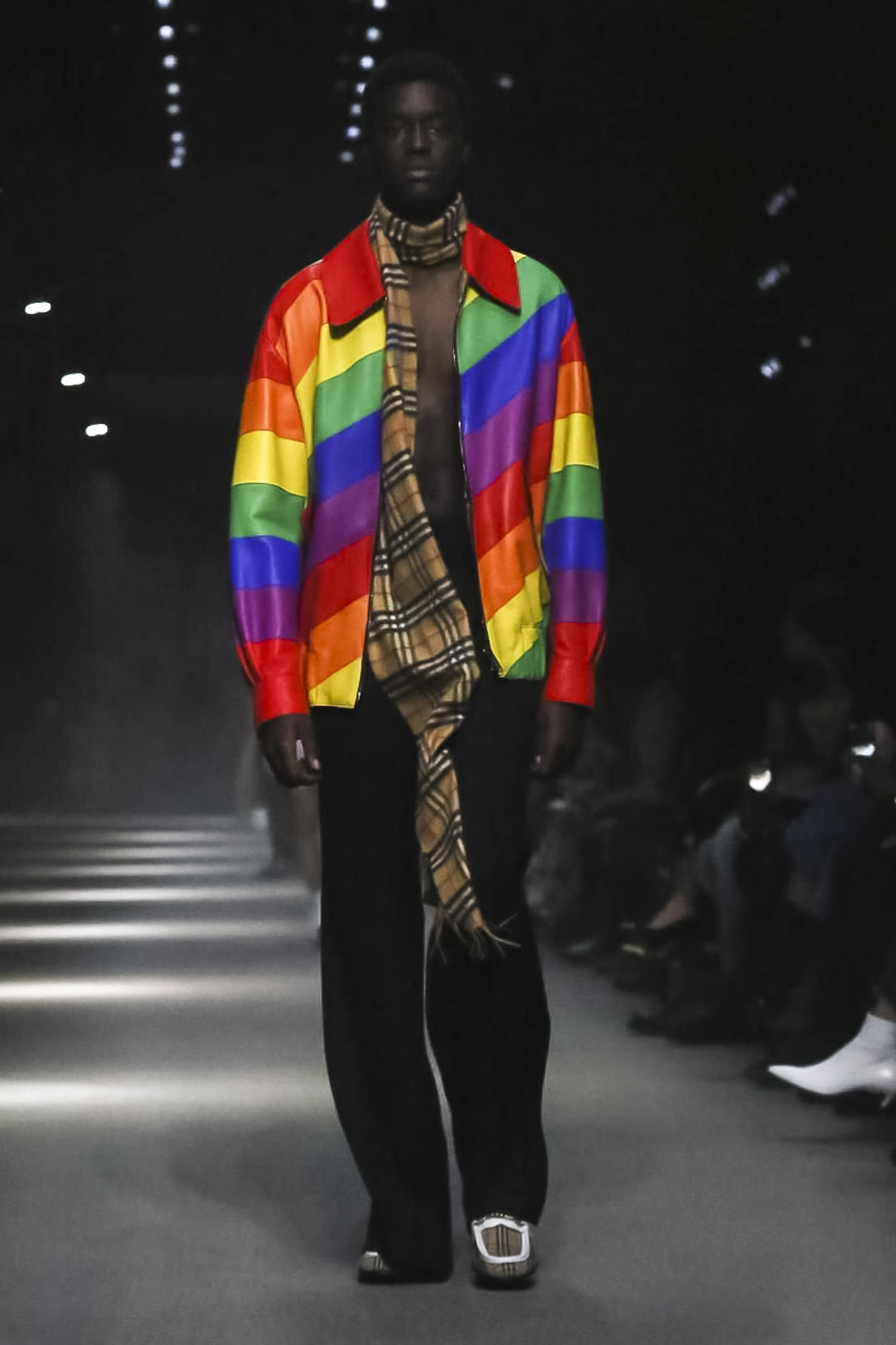 Before the assumption was made that London Fashion week was all about grandma’s closet and the glamorisation of comfort, along came Gareth Pugh to shake up the game. Out of all the feminist-themed collections that have graced the runways of 2018, Pugh’s collection spoke the clearest message.

The collection was designed “for women who except zero bullshit” wrote Pugh, whose uncomplicated clothes reflect this mantra perfectly. There are no obsolete buckles, pinching corsets or scandalous see-through skirts to be seen; just monochromatic, powerful and flattering designs that evoke the visage of a strong leader who dresses for no one but herself.

Although potentially awkward in a logistic sense, the exaggerated 80s shoulder pads almost mock masculinity. They seem to play on a comic representation of the scary boss-man, implying that it is women now who have the power. Sorry guys, but our shoulders are bigger than yours…better hit the gym.

Yet femininity was still perfectly balanced with drawn-in waists and tailoring that respected a woman natural shape. Being free of ‘bullshit’ doesn’t mean we can’t be sexy. 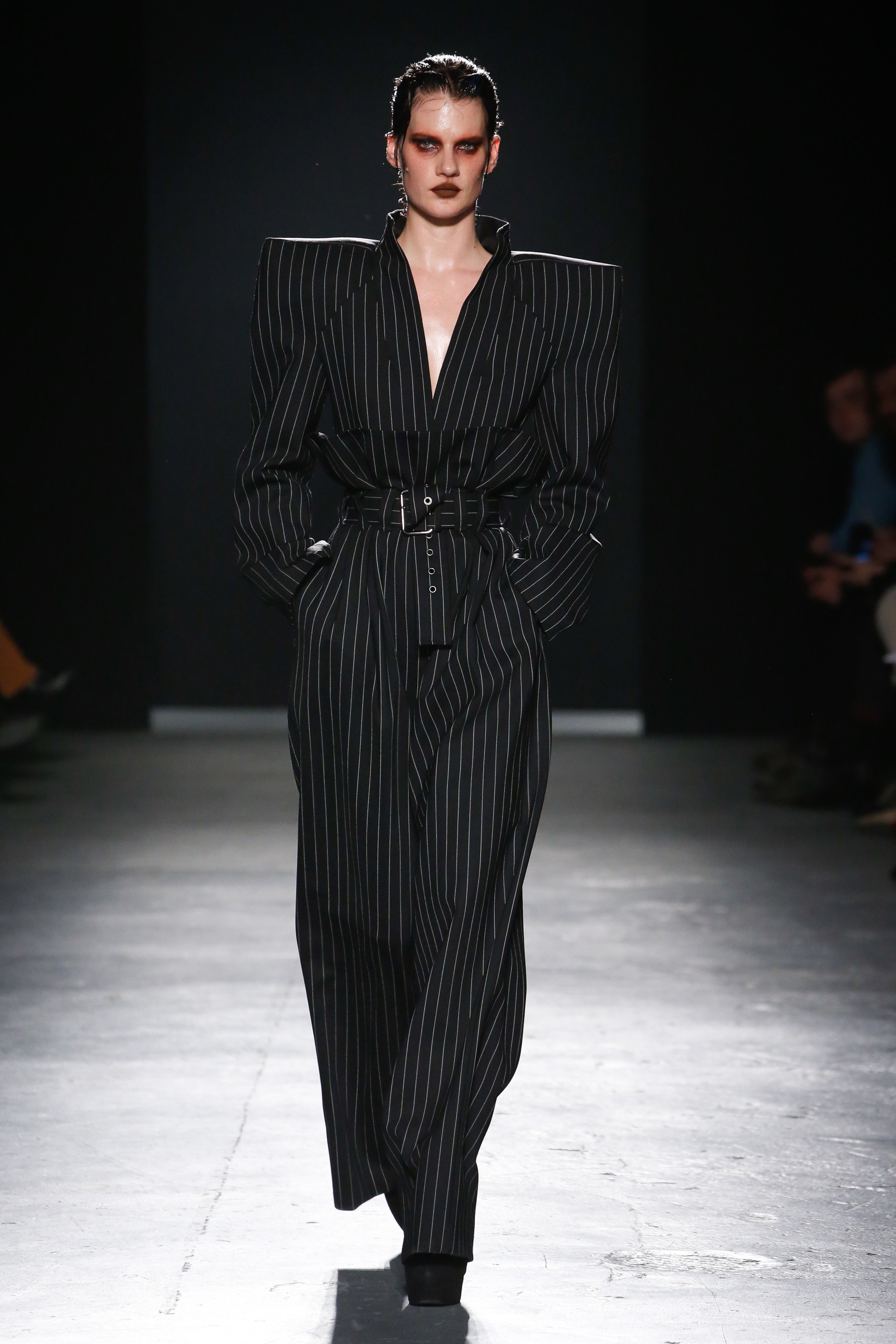 Although the modern Boss-woman might wear her Gareth Pugh suit to the office, she would wear her Halpern pantsuit to the party.

Halpern is no novice to the decadence of the 70’s and 80’s, recalling fluorescent plume sleeves, sequinned turtlenecks, and somewhat nauseating colour combinations. But (thank goodness) this isn't the twentieth century, and what Halpern creates makes perfect sense. Python whirlpools of green and gold are not nauseating, but interesting and vibrant, balanced with spectrum opposites and striped of black to prevent colours from overflowing. Halpern pushes harmony to its breaking point, creating compositions that are intoxicating. Who needs to get drunk at the party when you can just stare at a dress. 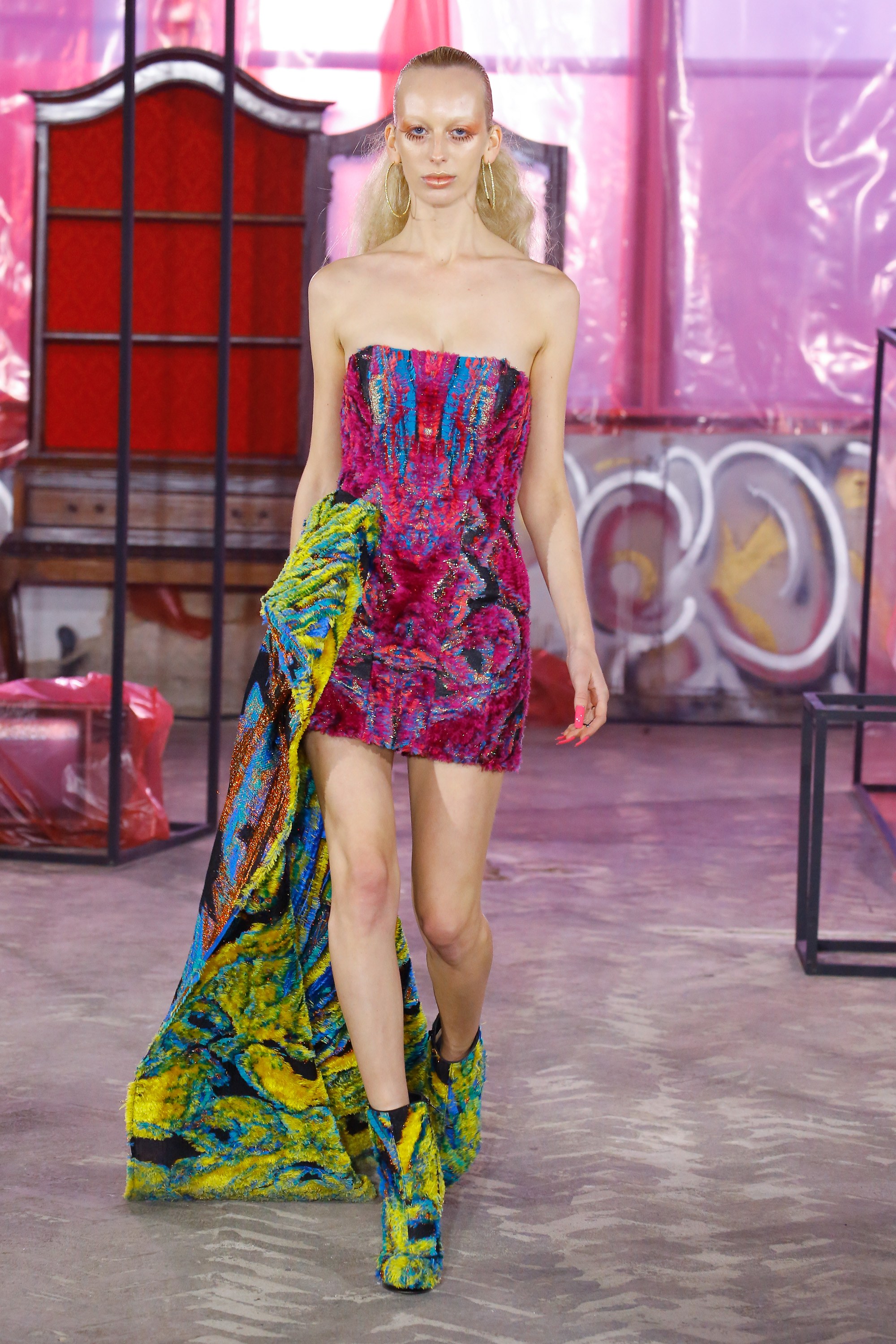 From the glitz and glamour at Halpern came sultry sophistication at Erdem. Opening with a pale green and black floral brocade, designer Erdem Moralioglu paid homage to British Chinoise aesthetic.

The collection felt like it belonged within a Virginia Woolf novel, as recurring accents of black lace netting and antique, faded velvets created the visage of an enigmatic, otherworldly woman. Moralioglu seems to have drawn inspiration from the flattering and freeing silhouettes of the 1930’s. From the romanticisation of the recession, Erdem seems to go back in time to the 20’s, filling the second half of his show with blinding silver sequins and Deco embellishments on decadent black velvet. 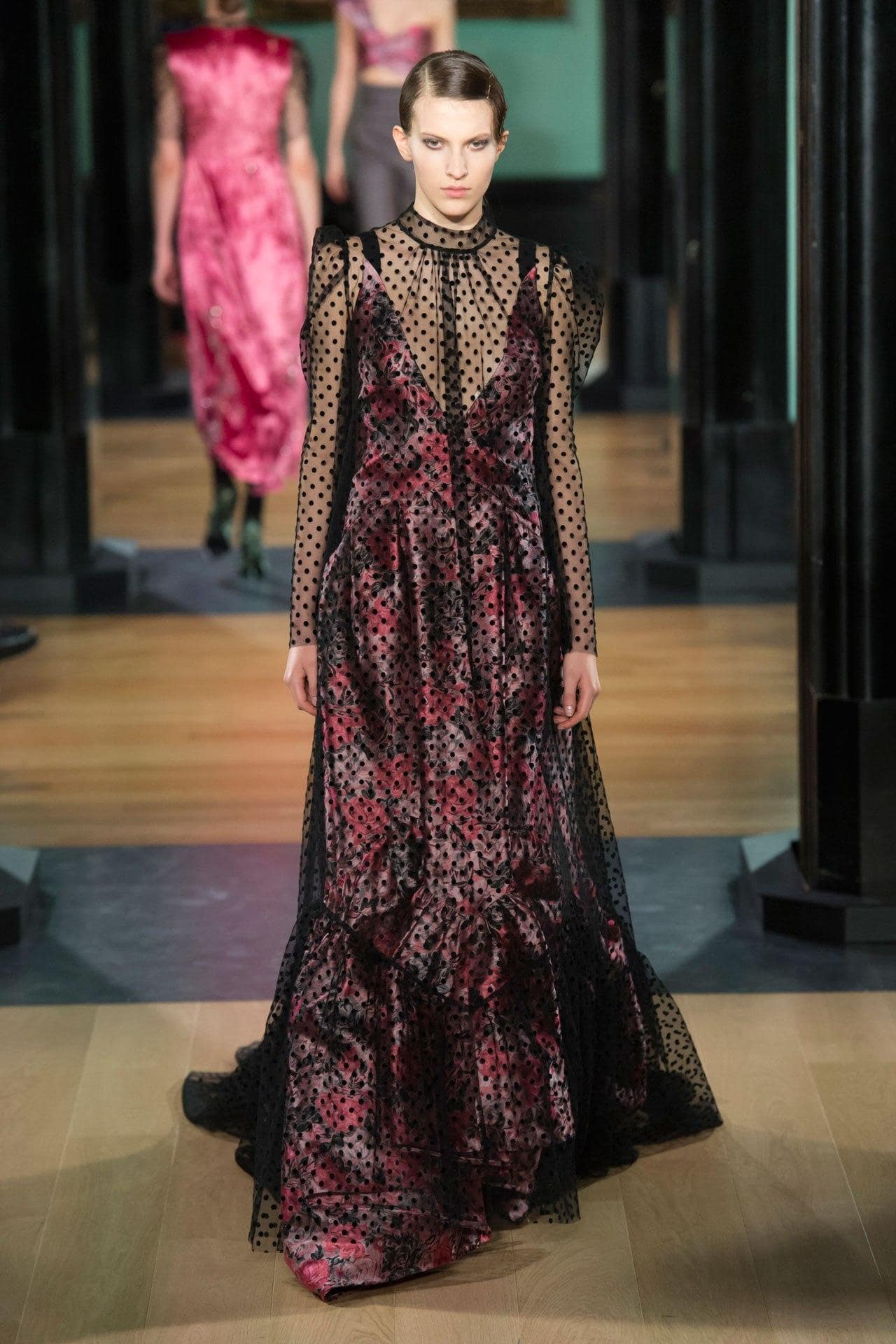 London fashion week proved that women’s fashion does not need to be uniform in style in order to promote feminism or set a trend. Its diversity is an ode to the modern woman, who does not bow to mainstream trends and expectations in order to express herself.