For some time there has been the issue of fashion impacting our global environment, society and the world economy which has prompted a need for the fashion and textiles industry to consider its global responsibility.

Edwina Erhman the Senior Exhibitions Curator for the Victoria and Albert (V&A) Museum in London has looked at this issue closely. This year on 21 April, herself and her team launched the exhibition ‘Fashioned from Nature’, a collection which will be presented at the V&A until 27 January, 2019.  Timely given that within the last year the luxury, high street and sports brands globally have announced they are reviewing their operations from a more environmental and ethical position.  'Fashioned from Nature' draws on the museums renowned collection of fashion to put these issues into context.

The exhibition is organised chronologically into five sections covering 400 years from the 1600’s to the present day, with the focus being on the bittersweet relationship between fashion and nature. With 350 garments this presentation invites visitors to think about the materials of fashion and the sources of their clothes.

Edwina understands that most people are preoccupied with the surface or appearance of their clothes and often do not know (or care) where their clothes come from or how the fibres within their garments are made.  She felt strongly that it would help people consider their fashion choices if they knew how clothes from our history were made. It prompts the visitor to think of what can we learn from the past to help us all design a more responsible but equally creative future.

Some of the most thought provoking and yet strange exhibits include a pair of earrings made in 1875 from Red Legged Honey Creeper birds. There is also a waist coat with the silk pattern of Macaque monkeys, presented along-side these silk exhibts are cocoons reminding or educating the viewer of the origins of silk production.  Many are still surprised to learn that silk clothes come from the saliva of silk worms. One of the most surprising pieces is a 19th century muslin dress that is decorated with 5000 jewel beetle wing cases. It would of been statement piece in its time, likely worn by a Victorian single lady for a stylish day in the sun, where the sunlight could pick up the iridescent shine from the beautiful beetle wings.

Other exhibits include certain choices made by celebrities who are bringing awareness to sustainability within fashion.  Emma Watson wore a Calvin Klein dress to the 2016 MET Gala Ball not only was it made as three separate pieces so that it could increase wearability it was also made from recycled PET bottles (though plastic is not sustainable it was good to see innovation through using waste). Stella McCartney has also partnered with Bolt Threads to create Mylo Falabella Prototype a handbag made from a leather alternative containing mycelium which is the root structure of a mushroom. There is also a dress created by designer Tiziani Guardiani which is made from a substitute leather called Vegea. Vegea is a sustainable leather made from the waste of grape production. 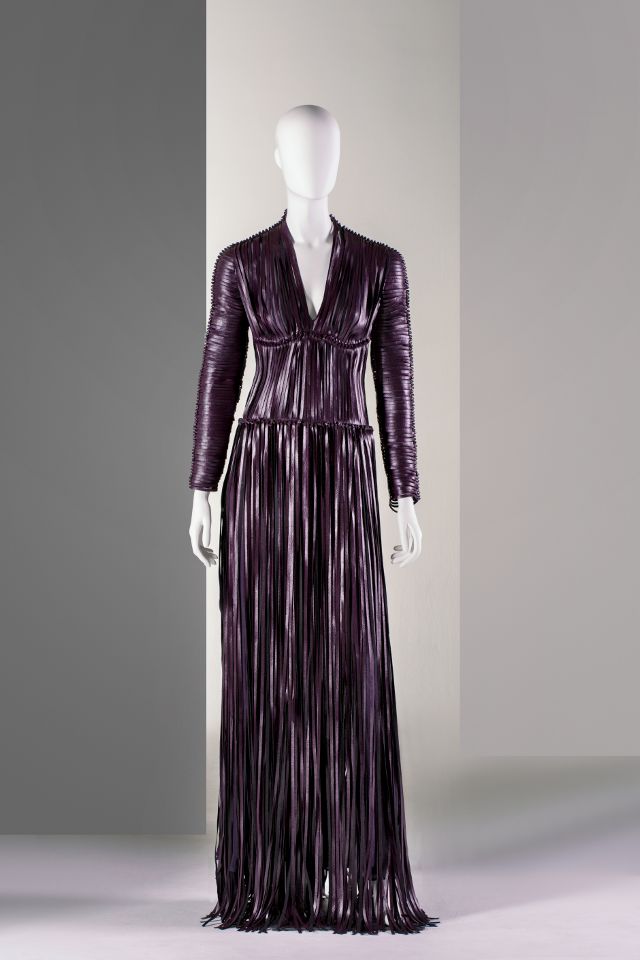 Mankind has certainly wreaked havoc on the natural world to this day however the gap of historical times to the present is the sheer scale on which the fashion industry produces clothes. The finale to 'Fashioned with Nature' is a series of proposals for a more sustainable future with encouragement towards adopting a more circular economy. Alongside this exhibition was an invitation sent out to designers to take up residence during this exhibition within the V&A to present their skills and ideas around achieving zero waste with a circular economy in mind.

Edwina Ehrman affirmed her thoughts on sustainability saying sustainability is not a modern luxury, it is necessary for it to become the norm so as to meet the need for fashion to be more responsible and conscious of our environment.