The 29th Amazon India Fashion Week Autumn/Winter 2017 was hosted by the Fashion Design Council of India (FDCI) and held at Jawaharlal Nehru Stadium in Delhi on 15th March to 18th March. 115 renowned designers from across India were showcased and 200 national and international buyers were expected to be present. This year’s fashion week sponsors were Amazon and associate partners were Maybelline, New York.

FDCI is the head authority of fashion design in India who has strong support from the Government of India, Ministry of Commerce and Industry and Ministry of Textiles. FDCI ensured that this year’s platform provided for womenswear, menswear and accessory designers which showcased the best of India’s rich heritage combining both heritage and futuristic elements.  Highlights included the runway talent from the Handloom School of Woven Weave students, Veteran designer Madu Jain celebrating 30 years in the industry, Namrata Joshipura’s modern, edgy runway collection to the grand finale collaboration of designer duo Tarun Tahiliani and Amit Aggarwal. 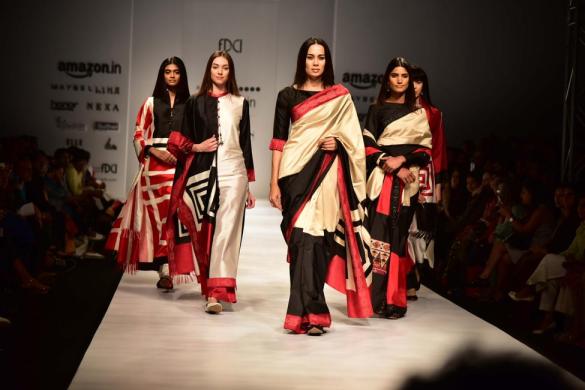 As mentioned, Indian Fashion sits between heritage and futuristic and this year’s fashion week was reflective of this, opening with a presentation from the Handloom School of Weave.  This runway show presented 13 designers with minimalist and distinctly modern pieces all woven by the students at the Handloom School.   The collection was seven months in the making with all the designers working pro bono for this show.  Models took to the runway barefoot dressed in pastel shades of white, nude pink cotton and wool blend fabrics.

Veteran designer Madu Jain celebrated 30 years of her label in the industry with a collection of Ikat weaves. She usually chooses to do installations rather than runway shows as you cannot see the intricacy in the artwork on a runway.  Ikat actually refers to the dying technique used to create designs on fabric and has been practiced in India, Indonesia, Japan and South East Asia for millennia. Yarns are dyed before they are woven into cloth.  Once the cloth is dyed and dried the weaver lines it up on a loom to form the pattern and the design takes form whilst the cloth is being weaved.  As it’s a complicated process, Ikat creations are rarely replicated therefore most designs are one offs. 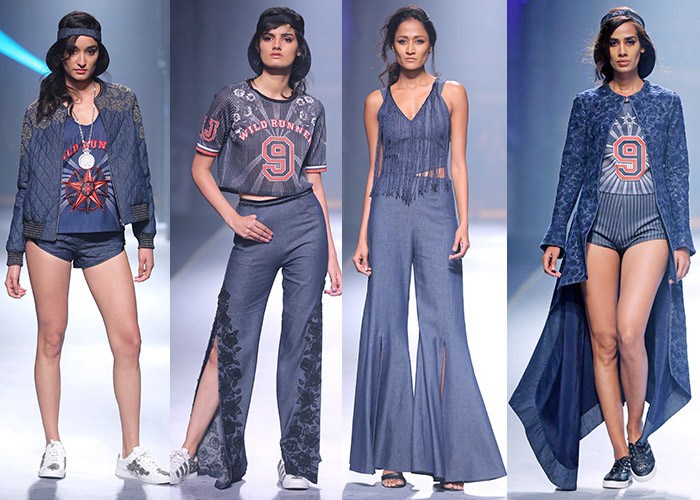 Actress Alia Bhatt was the show stopper who walked for designer Namrata Joshipura.  Joshipura focuses on the modern and it was no different for this fashion week as the theme for Joshipura’s show was the high drama fashion streets of New York, expressed in the collection which had graffiti and sequins with a melange of gowns and sporty wear.

Amazon India Fashion Week Autumn/Winter came to a conclusion with a grand finale that was a collaboration with designer duo Tarun Tahiliani and Amit Aggarwal who showcased more than 80 garments.  Tahiliani has designed a line called ‘Fresh Look’ inspired by the nomadic beauty of Indian tribes and Mughal armoury.  Aggwaral created sustainable pieces for occasion wear with dramatic flair.